Behind several stacked paintings placed in a category titled Eye and Site, a topic of vision I found two images that I had been unsure about for a few years. They began as an experiment where I tried combining etching with oil paint on a finely woven canvas. The printing ink adhered quite well so I stretched the image over a frame and then had a go at trying the oil combo.  Even though I gessoed around the etching somehow the oil bled into it but not enough to obscure the highlights. The random bleeding gave the face, traditionally rendered,  a surreal appearance and my depiction of a light fitting and its shaft of light then merged with the distorted image of the face. I like playing with form and light and how they both distort, in a graphic way, figurative imagery.

Well these distortions seemed to tell me that on one level light could also look  form-like and then form merge into light. On another level, light was meant to elucidate form but here it obscured it. So I was partly happy put them aside to ponder, ponder. Much later however apart from looking raw I began to see them differently.

I wanted them to say something about how in darkness we see back light years and in day light our vision is limited to immediate objects. Then I thought of how, by including the image of my head torch like a miner’s lamp fastened to my forehead, it might improve the composition and what it was that I was trying to say. So I blurred the original light source leaving a faint shape indicating a transition from light shining onto a form to light coming from it.

Now I am resisting the urge to dribble pink paint onto the image or should I leave it? Is this another ‘light is in the blood’ or is  ‘light in the blood’ the same as light in the universe? Yes looks like another pink ear coming up.

A clearer head this morning so I’ve let things be. 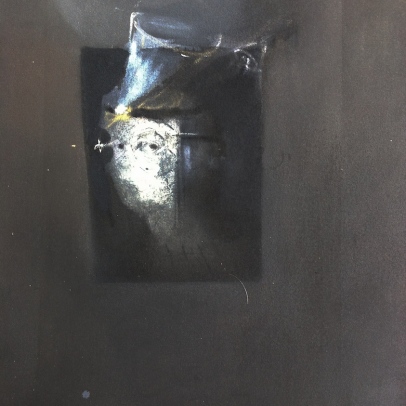 Something about Vision 1, 2011-15, intaglio and oil paint on canvas

Something about Vision 2, 2011-15, intaglio and oil paint on canvas

I have been producing oil paintings, mixed media, prints (etching), digital prints and drawings for many years travelling to the Australian outback and overseas for inspiration and further education. My formal education consists of a PhD in painting and a BA in printmaking and my artwork is represented in public and private collections. My purpose and ongoing challenge is to create a gender-balanced and environment-focused iconography within the Western canon of European oil painting. These themes find expression within imagery about time, memory and identity as well as in geomorphology of evolutionary and environmental significance.